Even in areas with no access to a power supply, the solar powered radio warning system ensures complete safety management in dangerous construction areas such as disaster prone areas and erosion control works.

This is the ideal application

The construction area on the river and the general mountainous area around it carry a high risk of mudflow and landslides. While keeping construction workers safe, for the local residents in the area an emergency warning system that can immediately supply a warning is used.

Radio communication between transmitter and receiver is used eliminating the need for any wiring or cables and making installation of them much easier. By making power available from a solar panel, it is possible to install unit by the river or in mountains where access to a power supply is difficult.

The system and radio product used in this case study

– How did you find out about Circuit Design?

– How was the comparison between Circuit Design’s module with those from other RF module manufacturers?

We did not have much RF knowledge, so we did not really compare Circuit Design products with those from any other company. Our trust was with Conlux whose product we used. Our knowledge of Circuit Design through remote engine starters led us to believe that the company’s products were of high reliability.

– What was your impression when using the actual warning system that incorporated Circuit Design’s RF module?

With its simple functionality, we were able to implement a sensor for mud flow and connect to a warning rotary beacon. In addition to the ability to extend operating range using relay unit, we can register IDs of as many as 14 transmitter units to 1 receiver unit. The ability to register / remove ID of a transmitter from the receiver’s memory was also convenient.

The performance of the module was beyond what we had expected. The system that Conlux built for us was excellent.

– Tell me the good points about Circuit Design’s RF modules?

Depending on installation conditions, signals only travelled as far as about 200 m when used in less than ideal locations. In ideal conditions, signals travelled as far as 1 km. This was without using relay system. Our impression is that the radio signal propagation is good. Because of the radio warning system’s superior performance, we were confident that we would not need to actively promote sale of this system and instead rely on word of mouth.

In October 2013 where the mudflow incident occurred in Izu Oshima, by introduction from users in the neighbouring prefecture, we received many orders for installation of mud flow sensors which also included orders from the government office.

– Was there anything about Circuit Design’s RF module that you found inconvenient?

The signals do travel far; sometimes it can be a problem. Depending on the situation, there are places where relay system (using 3, 4 relay units) is necessary and places where direct route between transmitter and receiver is enough. But a signal from a direct route which is normally of sufficient strength can interfere with signals in transmitter-receiver systems that use relay. As both communication methods are not kept apart from each other, interference occurs and the RX cannot receive the correct signal.

– Regarding the above, a channel change feature was added to the next batch of RF modules and the above issue was avoided. We explained this to Conlux (supplier of the system), they re-assured you (Hokuyo Construction) that it would be solved.

Thank you, this helps us very much.

– Do you have any request for Circuit Design?

Having 2 buttons is enough, however to prevent false trigger of the siren, we want a more error resistant remote control unit that is waterproof. When our current remote is inside our front shirt pocket with a mobile phone, the buttons get pressed by accident during rough handling. We want a remote control to be developed that can operate and withstand such rough handling.

– How did you know about Circuit Design?

Previously, we knew about Circuit Design as they were situated near us.

When our engineers participated in the Electronics Research Group in Nagano Prefecture – a meeting place for engineers, we obtained the name, Circuit Design.

Personally, I have used their remote engine starter on my car.

– What made you adopt Circuit Design RF module for your product?

Our client, Hokuyo Construction asked us if it was possible to turn their emergency warning system (incorporating mudflow sensor, land expansion / contraction sensor, rain detector, rain gauge) from a wired system to a wireless system.

– Then you became interested in Circuit Design RF module?

We had our doubts about introducing wireless, but we wanted to see if it could work. We first did not really think about the range of the RF module. Obviously, having a wireless system would be convenient. Firstly, we could see if we could transmit a simple switching signal.

– How was the comparison between Circuit Design’s module with those from other RF module manufacturers?

When we began development of the system in our company, we were given another company’s hoist / crane radio remote control system from Hokuyo Construction. When we looked inside the unit, we saw that it used Circuit Design’s RF module.

We know that hoist / crane systems need high reliability, so when we noticed this RF module being used here, we quickly understood why such module was chosen for this type of application. So we did not really run a comparison with other company’s RF modules.

– What were the good points about Circuit Design’s RF module and can you tell us anything about the module that you thought was inconvenient?

In fact, there was no negative point regarding the module. Very high reliability! When used in areas with no access to mains power supply, operated by battery because of minimal power consumption and in combination with solar panel, the unit can be installed anywhere.

Our opinion is that the module is resistant to damage. It is not affected at all by any lightning strikes and in actuality, such impact due to a lightning strike has never occurred. Depending on the installation location, there is risk of salt corrosion on the metallic case of the unit, other than that, the RF part performs perfectly. Especially, the point on high reliability, one can say this is a superior product.

If I can find any weak points, I would say that there is a slight timing issue between the RF and the rest of the circuitry. But during many numerous placements of the unit, up to now we had only 3 incidents of failure.

In November 2013, at the mudflow disaster site in Izu Oshima, many systems were installed there. This warning system has gained recognition in its market and there have been many requests from the administrative agency and ministry to install such systems. 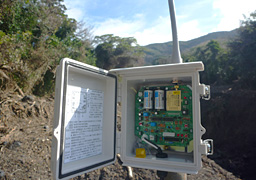 For enquiries regarding the radio module used in the above system, please contact Circuit Design, Inc.

Please note that the manufacturer of the above system cannot accept any enquiries regarding their product.